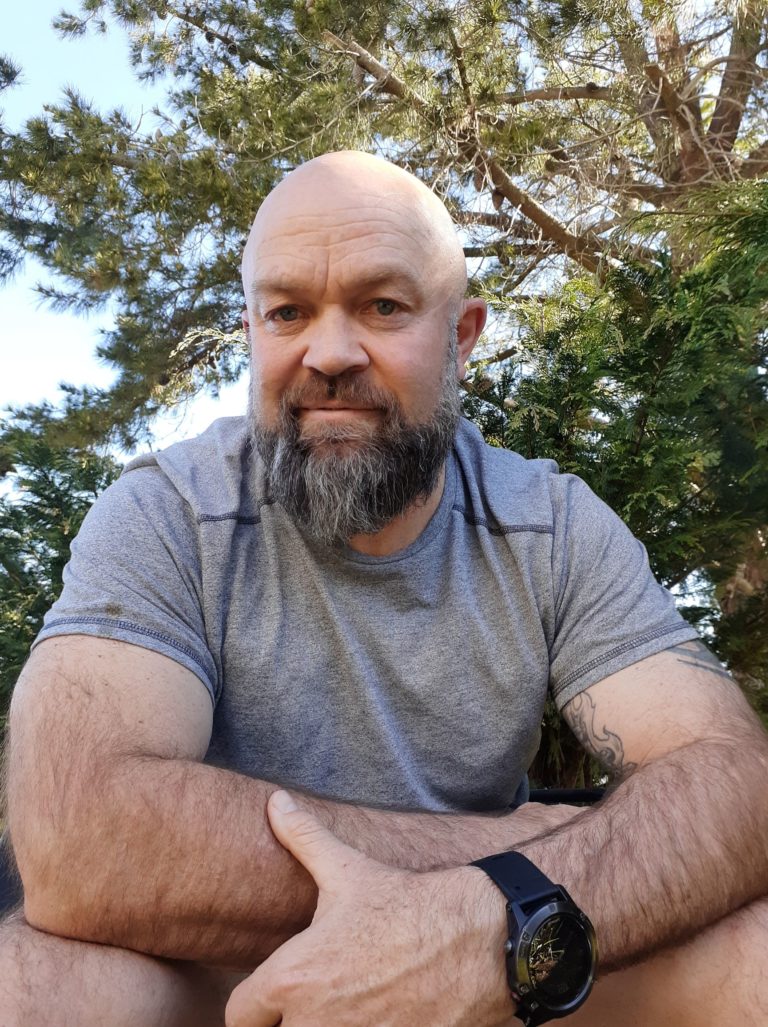 Like most of us, Jamie “Stedo” Stedman isn’t a fan of labels. But if there’s one word to describe him, given his tumultuous childhood, capacity for forgiveness, near death experiences and refusal to become a victim, it’s “resilient”.

Stedo is a writer, speaker, and mental health and mindset coach, working with primary school kids with behavioural difficulties in one role, and adults in the fitness space in the other. “I don’t give them any fitness tips,” he clarifies on the latter. “I’m not qualified for that. I help people when they’re stuck inside their own heads and can’t see a way out, which can really sabotage any health or wellness-related goal.” Even without knowing his background, it’s obvious that Stedo is well-suited to this career. He has a calm demeanor and his favourite thing, he tells me, is “chatting to the humans”. But when it comes to lived experience, the term has perhaps never been more apt.

When I ask about his childhood, Stedo explains that the first five or six years were “normal”, up until his Dad left the family home. “Mum did what she had to do, she was a very hard worker. She was the first ever female Manager of Kentucky Fried Chicken in Australia. You know, it doesn’t seem like a big deal, but it was a massive deal. She was a really hard worker and provider. Back then.”

It wasn’t long before Stedo’s life dramatically shifted from an imperfect but fairly typical single parent family, to a situation far beyond what any six year old should be faced with. “It was the 70s. Back then heroin was as easy to access as a bag of chips. Mum started on soft stuff, tried the hard stuff because that’s what you did back then, and it just spiralled out of control. She got involved with some men who weren’t very nice to her, and in some awful situations,” he explains.

“We got raided by the police one time that I remember. Mum shoved all the drugs down the front of my pants because she knew the police couldn’t touch me. I would have been no more than eight years old. I went out the back and I buried it all. I remember thinking to myself at the time: ‘I will never live this life. This will never be me.’”

The eldest of his mother’s eventual six children, Stedo’s childhood involved trying to protect his siblings from witnessing his mother’s drug use, a woman he now describes as “a pillar of strength” who did her best. “Mum did her absolute best in a fucked up, horrible way. She did notice we had no food, it was her burden to carry every day. We went for months without electricity at one stage. There were always drugs, but there was rarely food.”

At around age nine, he tells me he “had a break” from all the family chaos when he died twice on the operating table after an accident that left the family sedan wrapped around a telegraph pole. Stedo was the most severely injured, with a fractured cheek, broken ribs, a punctured lung and a ruptured spleen. “I was in the hospital for three months and didn’t have to worry about anything. I felt a bit guilty because I wasn’t looking after my brothers and sisters, but mostly, I enjoyed the time to myself without having to worry about what to eat, or what was happening at home.”

After his health improved and he returned home, things remained just the same, if not worse. The lack of food in the house meant there were times when Stedo and his younger brother took matters into their own hands. “We got busted stealing from the grocery shop because we didn’t know any other way. Me and my little brother had all these chocolates stuffed up our jumper and we got sprung together. The shop owners basically stood there screaming at us, dragged us up into the manager’s office. They said, ‘We’re gonna ring the police’. To me it was like, ‘Cool, this will be great. Maybe they will help us?’”

The pair were told off by the cops and sent home. When help did eventually come, it was thanks to Stedo’s beloved Pop, Hank, working behind the scenes. “My grandfather on Dad’s side hired a Private Investigator to find out where we were. Mum had distanced herself from everyone in the family quite a while ago, she was ashamed and kept moving to new places, enrolling us in new schools.”

He adds: “I am hazy with dates but I remember the actual moment as clear as a bell: I remember being at school and looking up and thinking, ‘Geez that man across the road looks like my Pop’. He just nodded, and I took no notice. When I finished school that day, he was standing there waiting for us. He had lollies.” Stedo’s voice shakes as he remembers the emotion he felt at that moment. “I thought we’d been rescued. But he couldn’t take us. It was all a big legal thing at the time.”

Aside from the legalities of not being able to just walk in and take the kids, there was also a lot of secrecy, with Hank hiding his investigation from everyone – including his own wife, who had begged him not to get involved. “You know how it was back then, ‘Mind your own business’ and all that. But Pop was determined.” For the next couple of years, the household money disappeared even faster, the family kept moving, and Stedo’s Pop was still doing everything he could, “but we kept shifting and they kept missing us I suppose.”

That was, until Stedo’s mum ended up with a brief stint in jail. “At the time she didn’t tell us where she was going, only that she was going away for a little while, and that our lives would be better afterwards.” Stedo and his brother stayed with their Pop and Nan, while the younger children, who had a different father, went to other family members. The arrangement didn’t last.

“My brother was wild, he was too much for my Nan,” Stedo explains. The boys then went to stay with various aunts and uncles, and by this stage, had been declared Wards of the State. At times, Stedo was placed somewhere without his younger brother, but he’d simply run away, or make threats in order to get him back. “Eventually the authorities got tired of it and kept us together, although the girls remained living with other family members.” And sometimes, they’d all end up back with his mum and his violent stepfather.

Stedo says the word “stepfather” with noticeable disdain. When I ask about him, he elaborates matter-of-factly. “He was just a piece-of-shit-human. He used to beat the living crap out of me and my brother for the smallest things. I have always said that if I ran into him again there would be payback. I was a little kid then, but now I can hold my own. But today, I think he just wouldn’t be worth it.”

By the time Stedo was twelve and just starting highschool, his biological father had been located, who came back onto the scene to raise the boys. “It was tough at first, because I was used to doing whatever I wanted. We finally had some structure and accountability, and it didn’t bode well in the beginning,” Stedo laughs. He adds that he has grown quite close with his father, a man who with hindsight wishes he were present during the kid’s early years. Stedo shrugs, “But that’s just how it was back then.”

I ask Stedo how his background influenced his life as an adult. Did his childhood make him have more empathy for others? “It did and it didn’t. I can absolutely be sympathetic to people and what got them into certain situations, and I don’t judge because life is tough and we all make bad choices. But I don’t pander to the victim card.”

He adds: “The most important thing to remember is that you’re in charge. No-one else is responsible for your life; your future isn’t defined by your past.”

PrevPreviousThe Ego Ain’t So Bad
NextHolden Sheppard: ‘I just want to do what I do’Next